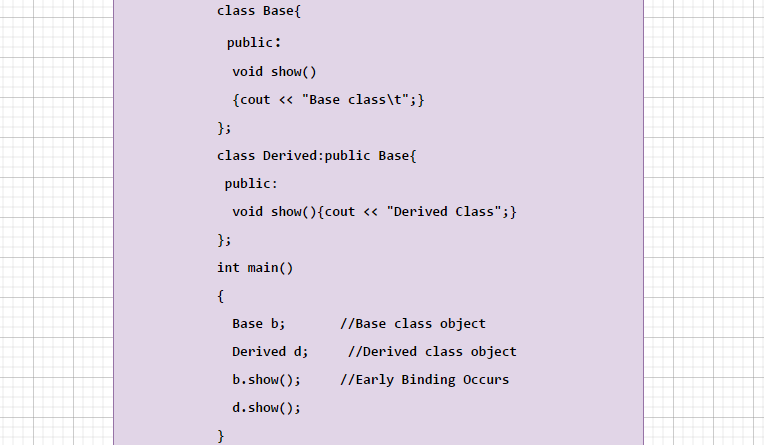 Function overriding, in object oriented programming, is a language feature that allows a subclass or child class to provide a specific implementation of a method that is already provided by one of its super classes or parent classes.
If we inherit a class into the derived class and provide a definition for one of the base class’s function again inside the derived class, then that function is said to be overridden, and this mechanism is called Function Overriding.

Points to remember for for Function Overriding in C++

Connecting the function call to the function body is called Binding. When it is done before the program is run, its called Early Binding or Static Binding or Compile-time Binding.

Here we created a class named Base class and another class named Derived class which inherits all properties of base class publicly. Both classes have same function named show with same function prototype, however both print different message according to their respective class’s. Thus the functionality is different. In the main function we created 2 objects of each of these classes and called their respective show functions. when the function of the derived class show is called, it overrides the base function show and prints “Derived class” instead of Base class. This is Function overriding.